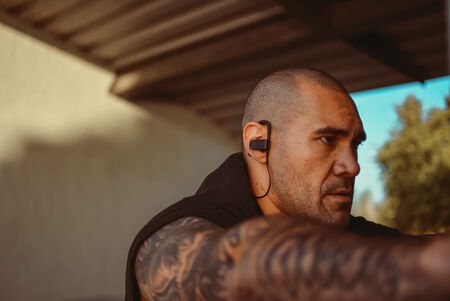 I was 34 when I first started taking CBD. The first time I noticed my heightened awareness from taking it was on a hot day.

I had never put sunblock on in my life. My wife and I were out in the sun one day, and the sun was just beating down. It wasn’t that hot, but I could feel the sun just penetrating my skin. I was much more aware of what was happening to my body, and the only thing I could link it back to, was the CBD.

With heightened receptors, I could feel my skin burning. They say to apply sunscreen every 30 minutes; this one day in the sun with my wife, I could FEEL it every 30 minutes. It wasn’t even that hot out; there was a slight breeze. Yet I felt an intense singe, and that was the first time I felt the effects of CBD and how it heightened my awareness.

Even though my receptors were heightened to the sunlight and UV rays, my pain receptors had surprisingly become more relaxed, like they were neutralised. When it goes to work on your endocannabinoid system, our ECS, it’s a system composed of CB1 and CB2 cells. CB1 is throughout the brain; CB2 is primarily throughout the body. The plant reacts with these in a way which shows the cells’ ability to either attach to endorphins, or act as blockers to our pain receptors.

All of a sudden, I felt like it made me superhuman again. I was always known for sheer toughness, because you have to be tough when you’re not the biggest, the strongest, or the fastest, and this had resulted in years of serious damage to my body. I would feel that damage every day. I would get up in the morning. I would have to dangle my feet over the edge of the bed, let the blood rush to them, then I would slowly get up and I would ‘furniture walk’ from the dresser over to the bathroom. I felt like I was just old. Within days of taking this, I just started to move with less pain. I couldn’t believe it. It was probably the fourth or fifth day after taking CBD, when I woke up and just … got up. I walked freely to the bathroom, and didn’t think about any of it until afterwards. My ankles, toes, knees were no longer throbbing or aching. That’s what spawned the little voice in the head saying, “We can do this”.